Out since May 25, Roller Champions brings you an explosion of colors and choices, creating a vibrant atmosphere in which you can display yourself as you wish.

When Joel joined the team, he was playing games like Arms, Splatoon 2, Rocket League, and Mario Odyssey which, he explains, “have this amazing ability to endure all generations without aging.” Naturally, he was inspired by them, “but I didn’t go crazy,” he continues, “I didn’t try to copy them, but to capture that flavor.” The goal was to create a style that would appeal to all types of players and remain relevant for years.

Many games today use a retro aesthetic, but the team didn’t want to simply recreate the past. Instead, Joel “tried to take retro arcade codes of color, graphics, and logotypes and modernize them to refresh the classics.” The result was the neo-retro style. 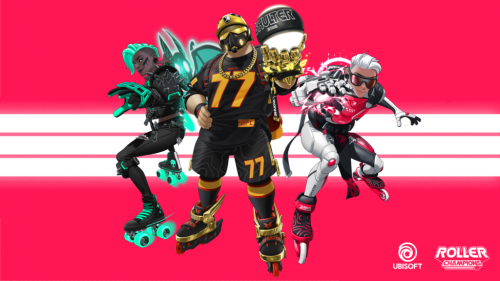 Basically, I put myself in the shoes of a 10-year-old kid who was glued to these games.”

The team combined this style with inspirations from different sports to create the graphic style of the equipment and arenas. Roller derby obviously had a huge impact, but the team also drew inspiration from field hockey, football, soccer, motorsports, basketball, keirin, and speed skating. “That’s what’s great, we really draw inspiration from all sports.” 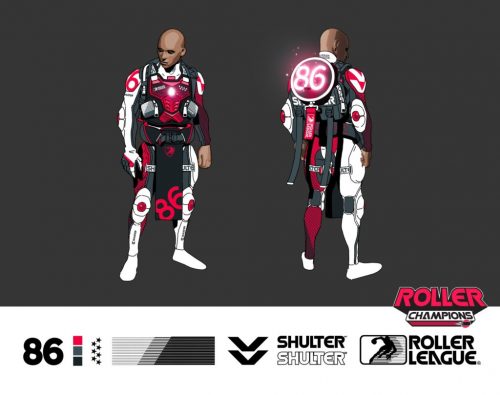 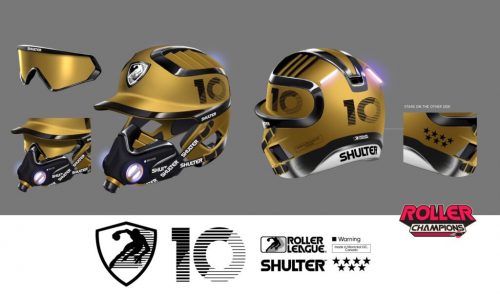 In the lore of Roller Champions, the sport was invented by three people from three different continents: Asha from Africa, Shao from Asia, and Sam from Europe. The team had fun designing them based on their place of origin, and to better distinguish them, Joel explains that it was important “to have very distinct color palettes.” An expert with her moves in the arena, Asha flaunts a bright red; Shao wears black and white to reflect his competitive and mysterious side; and Sam has a bright turquoise that fits their androgynous, colorful fashion style. And by focusing on the unique flavor of each champion, the team was able to establish the game’s art direction with “a limited color palette and a design that pushes the fantasy element all the way to 100%.” 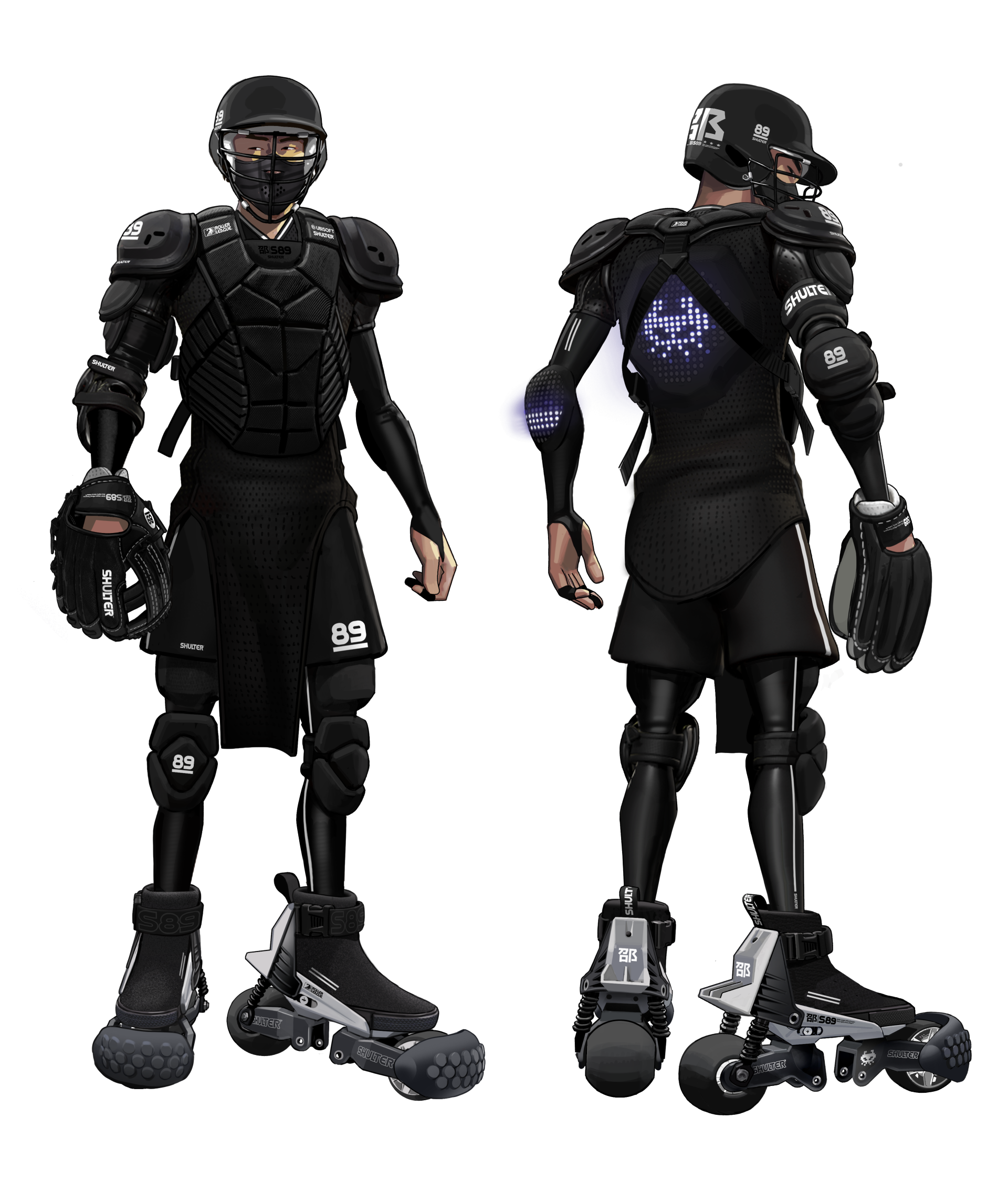 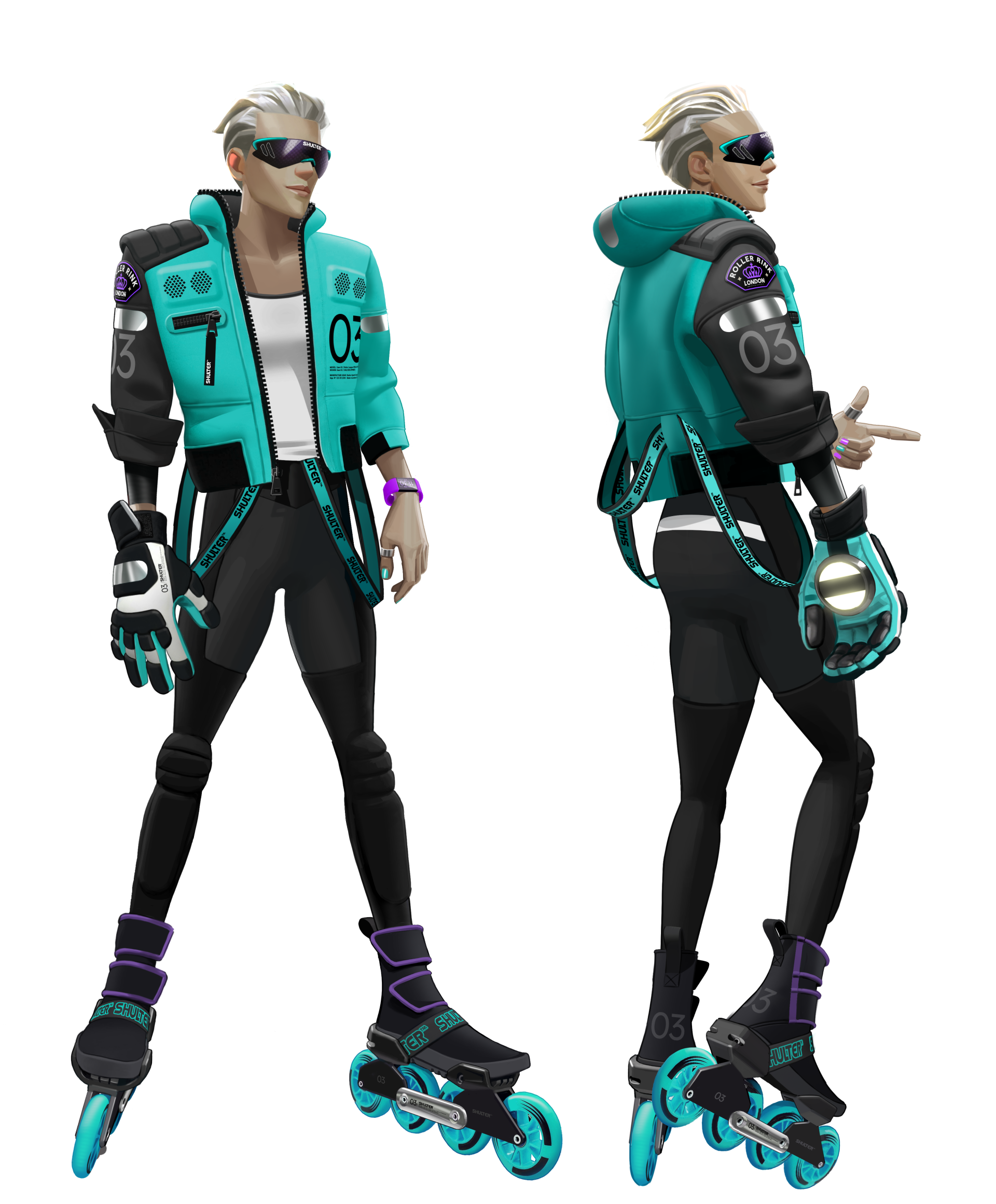 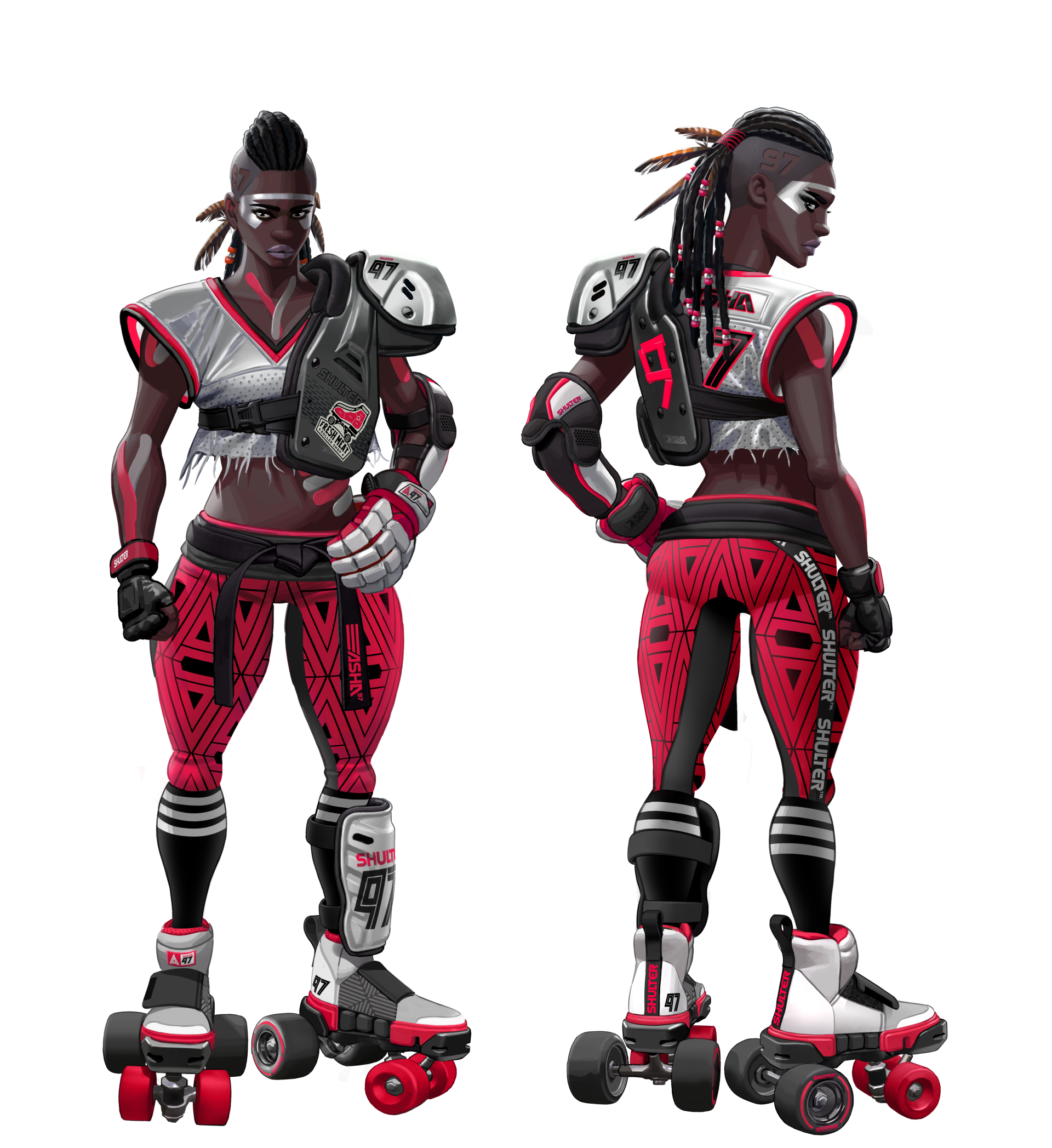 These artistic choices also align with the three-tone rule the team has in place, with one light, one medium and one dark. When it comes to combining different colored equipment, this rule allows the team to focus on one overall tone and thus ensure that the result remains visually consistent. “It allows us to control the mix and match of the gear,” Joel explains. “If you combine a blue glove with a green shirt and a red helmet, we’re going to make sure the tones still work well together.” 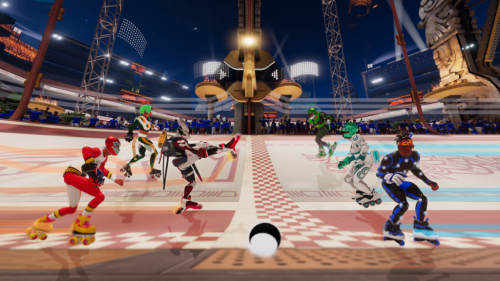 The game offers the ability to customize a single piece of gear just as well as an entire outfit, and Joel notes that he and his team consider themselves “almost like automotive or industrial designers when we create something like a pair of skates, because the challenge is that it has to be able to exist in real life, that if we have to 3D print it, we can do it.”

This mentality also gave the equipment a certain toy-like aspect. “We wanted to have that feeling of ‘wow, I made my character, it’s like an action figure. If it exists, I want to have it on my desk.’” And Joel emphasizes that this approach is not cartoonish, but rather stylized.

With a cartoon you distort, change the shape, simplify. But stylization exaggerates the realism and level of detail of an object to better appreciate it.” 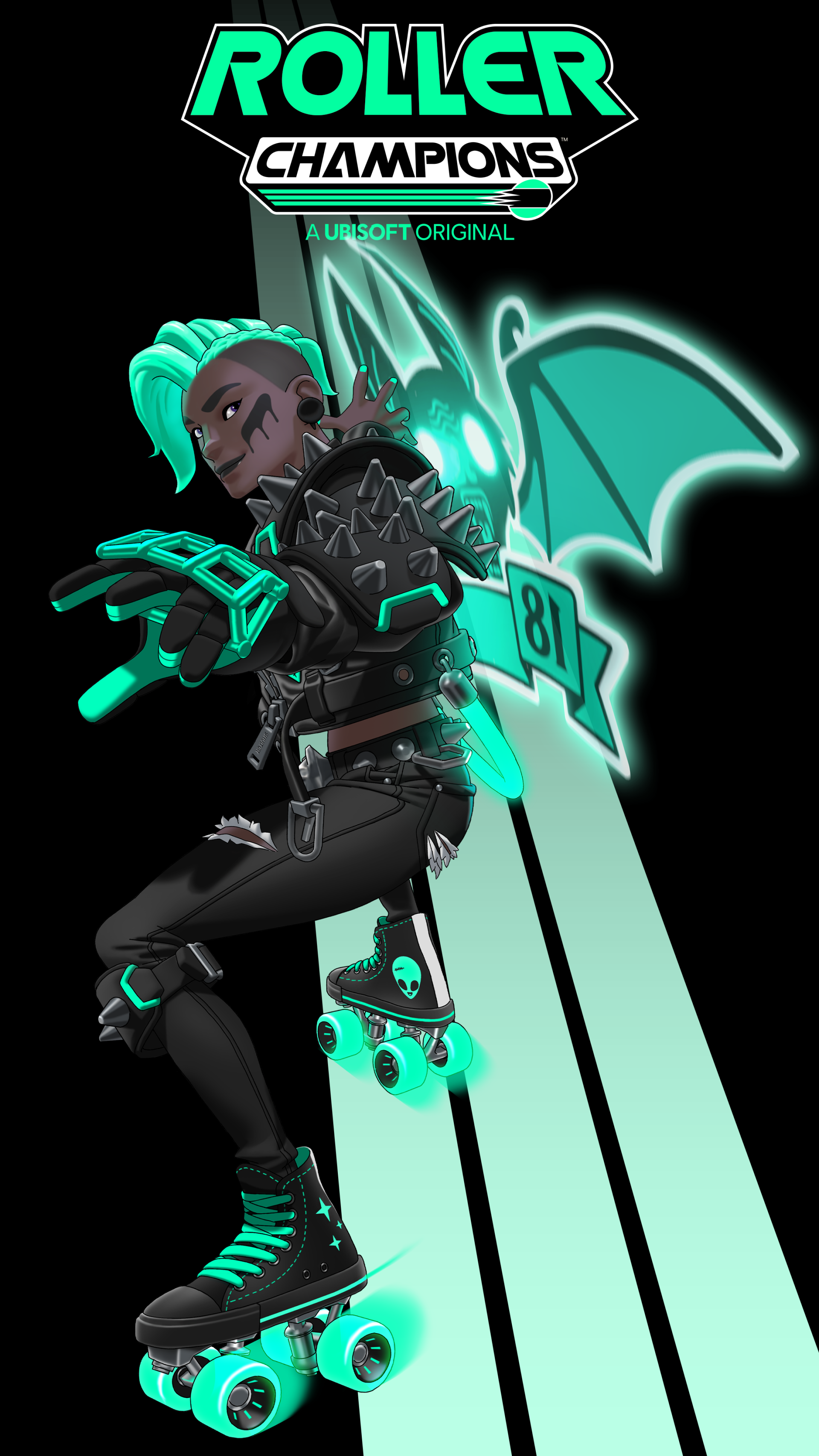 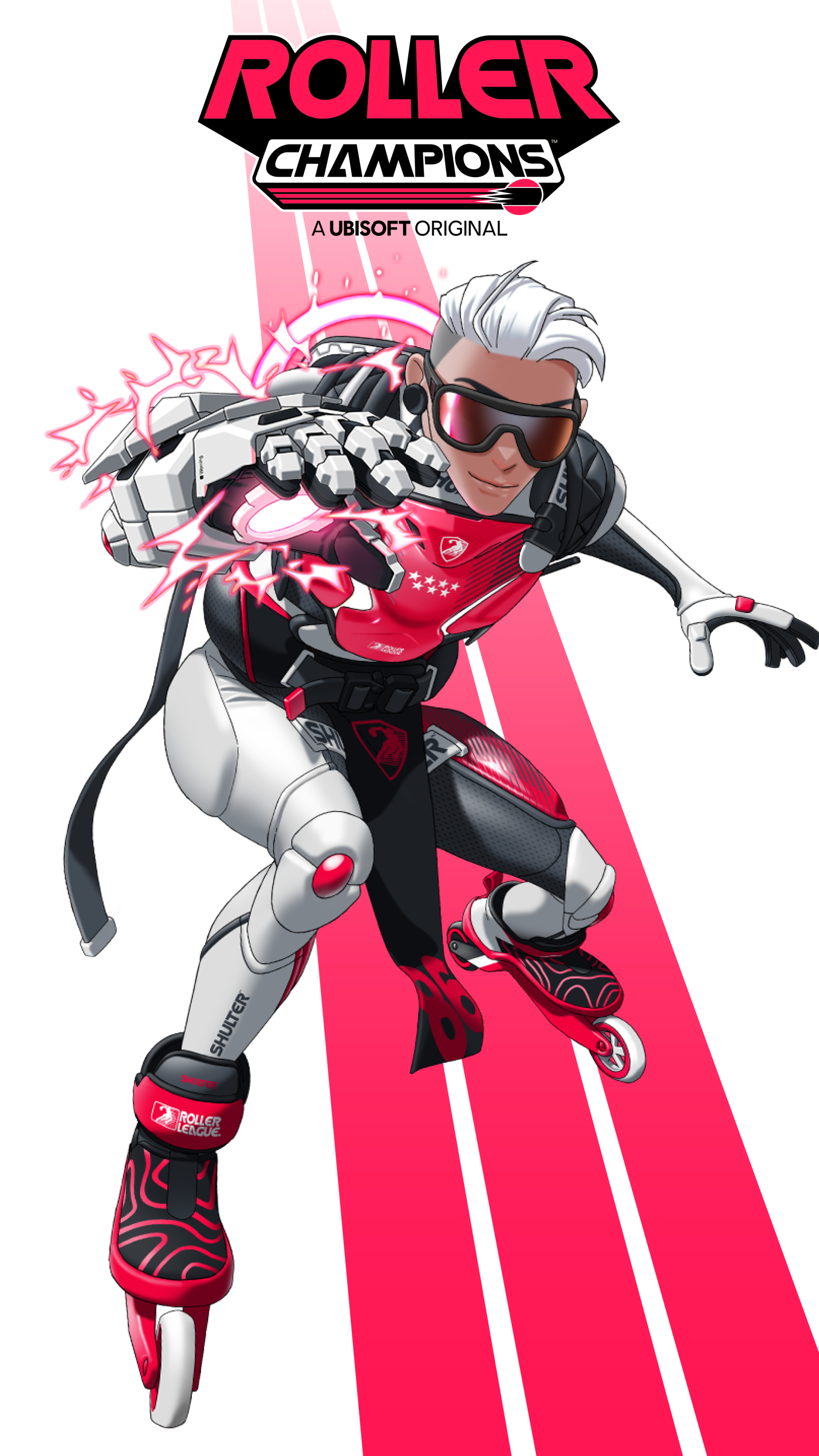 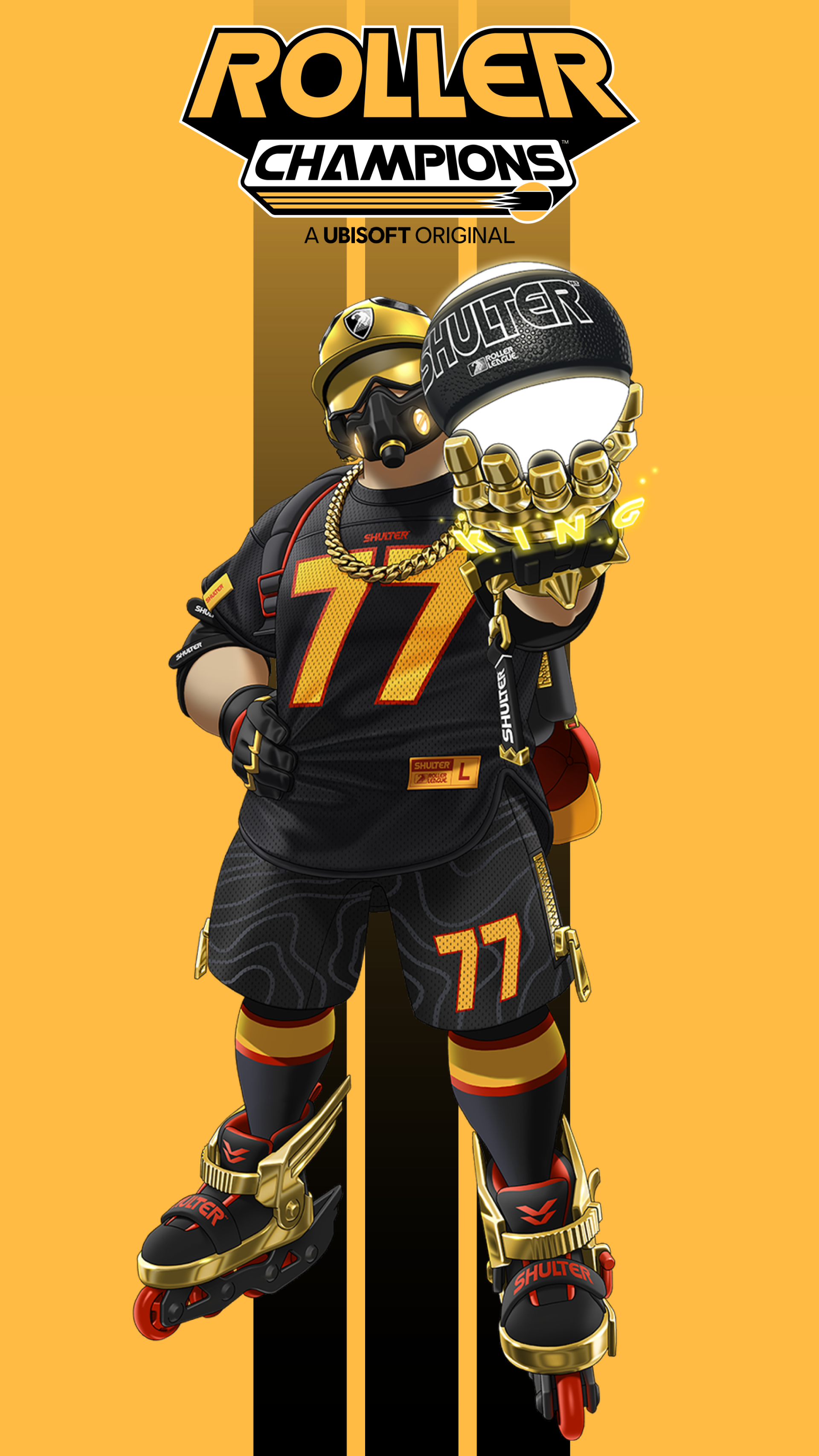 In your own image

Inclusivity has always been one of the pillars of customization, whether it related to gender, ethnicity, or any other aspect of appearance. “Rather than removing gender,” Joel explains, “for us gender neutral means that it’s up to each individual to make the decision of what kind of body type they’ll have.” In the character creator, the game offers three body types per sex, nine faces, and a range of skin colors – and everything can be mixed. “We don’t force any choices on the players.”

And it’s the same with the equipment. Usually, games offer two body types: male and female, and the outfits are related to one or the other. Roller Champions, on the other hand, offers the ability to apply gear – whether it’s more masculine, feminine, or unisex – in any combination.

In Roller Champions, characters are not classified as male or female. “If you look closely, the characters have no nostrils, no belly buttons, no fingernails, no chest, no gender really – that means it’s really like an action figure that you buy, like Barbie or Kent.” This decision was crucial in allowing players to focus on their equipment choices; at any time, the body type can be changed to better customize the character.

Inspiration from all over

In the coming seasons, Joel reveals that the team “will visit every possible culture, but we’re very careful from a cultural appropriation standpoint not to misrepresent a culture. I’m not going to take a traditional element of a culture and just slap it on a piece of sports equipment just because it looks cool. For us, it’s about understanding the history and meaning behind each item in a culture.”

The team works closely with Ubisoft’s legal department to make sure they don’t infringe on any culture. However, Joel makes sure his team doesn’t limit themselves before they even start. “I don’t want my artists to self-censor,” he explains. “I don’t want us to stop ourselves from doing something that would seem legitimate to do.”

We’re not in the shoes of these cultures, we haven’t experienced what they’re experiencing. But we do know exactly how to celebrate them.”

When the team conceptualizes an object, they go in all directions before taking a break and putting on filters. “At that point, I take a step back with all my goodwill and perspective, and you can immediately feel it when something doesn’t work.” 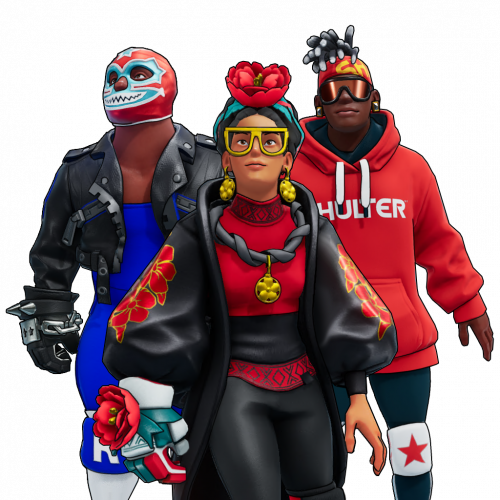 If there are legal issues, the team is ready to modify the object, but if the issue pertains more to a feeling, “then the discussion is more interesting and often we find common ground. That’s my job; I come up with solutions.”