Artificial intelligence in the video game industry: Part 3 of 3

In the previous articles (part 1, part 2), we’ve reflected on artificial intelligence, its evolution, its limits, and the challenge of trying to apply it in ways that are useful for everyday life. Here, we will look at the creation of Ubisoft La Forge as well as its great ambitions.

What is La Forge?

Ubisoft La Forge’s mission is to create prototypes that are based on the most recent academic advancements. La Forge is a platform designed as a tool for both Ubisoft, which sees it as an opportunity for technological transfer, and academic researchers, who can use it to access resources that they would not otherwise have access to. At La Forge, researchers can access the same data, game engines, technology, expertise, and infrastructures as Ubisoft employees. 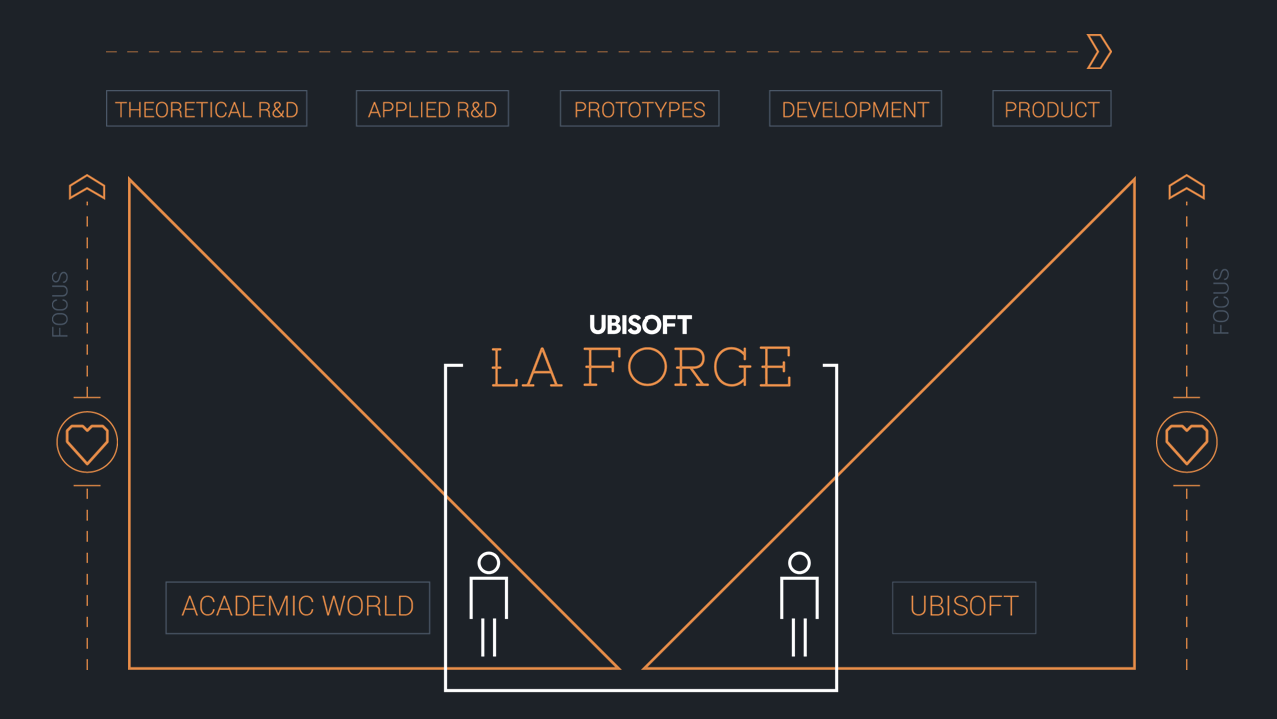 It is a happy intellectual match between university researchers and Ubisoft employees; they can all work together on the same prototype, which aims to open the door to both better games and recognized academic publications.

This premise has allowed us to grasp new paradigms in machine learning. Like all fast-moving, ground-breaking technology, it produces results that often fall short of our tried-and-tested methods. For example, an artificially generated voice is impressive when we know it is synthetic, but it can’t compete with the nuances or emotions of a human voice.

We have already touched on how AI can be used as a support tool to provide sufficient quality in certain situations (e.g., for very minor characters in a game) or to accelerate the automatable parts of development (e.g., generating animations to serve as a starting point for animators).

By including, or better yet, by committing experts to these projects, we are helping to speed up the process of adopting tools that support creation, as well as their course in becoming creatively functional. When our experts become confident that AI-generated content is reliable, replicable, and explainable, they are defining the situations for which these technologies may be directly shown to customers. For example, when an animation system no longer needs any manual intervention whatsoever in a particular context.

An open-world video game is a huge playground (the same size as San Francisco or Egypt, for example) where the ecosystem is simulated up to a certain point, including characters, vehicles, weather conditions, and so on. This open world is not necessarily realistic, but it needs to be credible and offer a great measure of freedom of action. Some people speak of simulations.

When certain aspects of these simulations are sufficiently realistic, then it will be possible to develop elements that can be transferred into the real world. For example, it is possible to train an autonomous vehicle in a virtual world, then implement the result with a real vehicle.

These are the three radical changes brought about by AI: the same technology can evolve to benefit our creators, our players and, finally, other fields of activity in the real world. In short, AI can have useful applications.

What does the future hold for us?

Autonomous cars are already making headway. Healthcare researchers are testing virtual avatars to treat patients with schizophrenia and anxiety. It is important to ensure that these avatars are credible and can interact in a multitude of ways, which is what we are aiming for in our games. Adapting the learning process to the learner is not that different from adapting a game’s difficulty level to a player’s style and skills.

Video games and artificial intelligence have been developing together for some 70 years. Recent advancements in each field are reinventing this relationship. It’s a bit like a couple that’s about to become a family—something new is about to arrive. Something that’s going to take the relationship to another level.

Another level in the game, of course.

To learn more about our prototypes, take a look at the Ubisoft La Forge page.